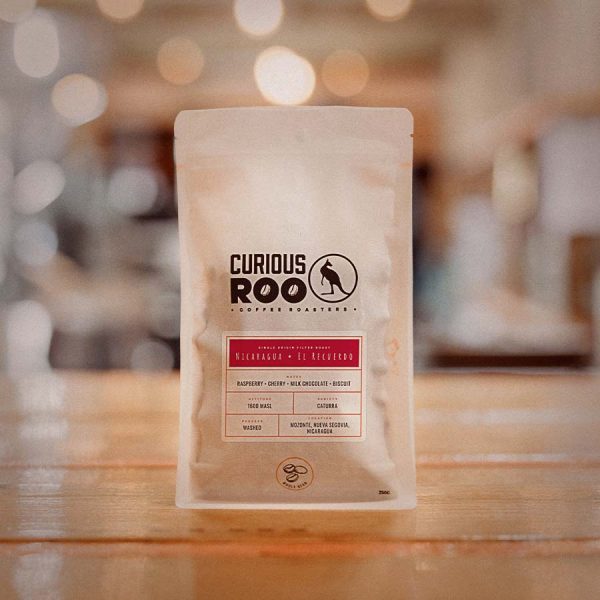 Marcos inherited El Recuerdo farm in 2015. The farm is roughly 1.5 hectares and is part of a bigger farm in Mozonte that was divided between Marcos and his siblings. Each of them has between 2 and 3 plots of land where they all grow coffee. During the harvest they help each other and take turns to complete all the work in every plot without hiring external workers. Marcos grows caturra, red and yellow catuai and maracaturra under pine and citrus-tree shade. As the farm is located at 1,600 m, the harvest happens a little later than most farms around and runs from January to April. The coffee from El Recuerdo is processed as washed, honey and natural. Once the cherries are harvested, they are taken to Cafetos de Segovia in Ocotal, to be processed. Cafetos de Segovia is a dry mill located in Ocotal and surrounded by coffee land, making it easy for producers to deliver the wet parchment the same day as they harvest and process it.

In 2015, a local producer family realised that the prices paid for coffee cherries in the region were too low and that they could produce high-quality coffee on their own farm. They decided to create a dry mill to add value to their product, and that mill is now run by sisters Martha and Ana, along with their team. The family own a few farms that were inherited from Martha and Ana’s father. Like many properties in the area (in the north, bordering Honduras), the story of the farms’ ownership is a complex one. From 1975-1979 the Nicaraguan revolution hit the entire country, but it was even more intense at the Honduran border, forcing the family to emigrate to the USA. They returned to Ocotal six years later to find that their house and much of their farmland had been seized by the government. Only the house was returned to them – they had lost more than 70ha of coffee farm. The dry mill services their farms and greenhouse – which they built in 2020 to grow experimental lots and more delicate varieties – but also the coffee of some relatives and a few non-related producers from the area. In total, 47 other producers work with Cafetos de Segovia. Up to 30 people work at the mill during the season. Most of the coffee is delivered as wet parchment or cherries and 80% of the lots are washed. The drying is usually started on a patio, in the shade for 5-6 days and then in full sun. All patios are covered with black net so that the coffee is not laid directly on the floor. Shade drying is necessary as the sun hits hard at this lower altitude (less than 900 masl). The naturals are moved every 3-4 hours and the coffee is piled during the hottest hours of the day. Cafetos de Segovia submits lots to the national Cup of Excellence every year, and always ranks highly.